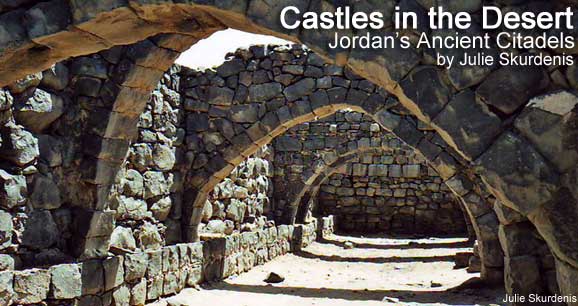 It’s been more than a decade since the ancient rock city of Petra made its silver-screen debut in Indiana Jones and the Last Crusade. Petra was an ideal backdrop for the action-packed movie. However, Hollywood overlooked what is perhaps Jordan’s second most-important archaeological secret — its desert castles.

About 75 percent of this Middle Eastern country, which is roughly the size of Portugal, consists of dry and barren lands. The black basalt desert east of the capital city of Amman is a seemingly endless and empty expanse wedged between Syria to the north, Iraq to the east, and Saudi Arabia to the east and south. It’s mostly flat, and dotted with low-growing shrubs, bushes and cacti.

There are few proper roads here, but dozens of desert tracks that crisscross the parched landscape. They have been used for centuries by pilgrims en route to Mecca, by caravans carrying goods from one trading post to another and by caliphs on their way to their royal retreats.

Forlorn in a vast arid sea, imposing desert castles and pavilions stood their ground as islands of civilization. Most of them were built during the Umayyad period, the first major Islamic dynasty, which reigned from A.D. 661-750.

As lonely as these bastions of civilization appear today — often located many miles from human settlement — they were at one time integrated agricultural and commercial complexes, well-watered townships situated at the edge of the desert.

Often constructed on top of and incorporating earlier Roman and Nabatean structures, these imposing palace-fortresses served many purposes. The magnificent desert pavilions could be used for defense, if necessary. But they were primarily places where the Umayyad caliphs could, to quote our guide Mohamed, “get away from it all,” leaving the cares of ruling behind and retreating here to hunt and hawk, relax in secluded baths, meet with tribal groups over whom they ruled, and occasionally offer hospitality to caravans passing through.

With just one day to spare for a desert excursion while staying in Amman, I had to select three of the many desert castles.

Qasr Kharana (qasr means palace or castle in Arabic), located about 37 miles (60 km) east of Amman, is one of the closest and easiest of the desert castles to reach from the capital. It’s also one of the oldest, probably built prior to A.D. 710, as an inscription found on one of the interior doorways suggests. Qasr Kharana is considered to be an important example of early Islamic art and architecture.

From the outside, Kharana looks like a perfect mini-fortress, with almost circular tower buttresses at each corner and semi-circular towers in each of the walls except for the entrance wall, where a pair of towers flank the massive entry.

Appearances can sometimes be deceiving, as inside, utilitarian stables and storage rooms surround a central courtyard on the ground level, and the upper floor of this desert castle is anything but fortress-like.

Here stone rooms are decorated with elegant columns, carved medallions and semi-domes, hardly decorative elements you’d find in a place designed just for defense. Even the arrow slits — too deep to be practical — were meant for ventilation and light. Qasr Kharana was probably used as a place where the Umayyad rulers could meet regularly with their Bedouin subjects.

About 25 miles (40 km) farther east lies Qasr Azraq, once in the middle of a large natural oasis that was a rest stop for pilgrims and caravans. When oasis water was pumped to Amman in the 1980s, the fertile green spot began to dry up, a process the Jordanians are now trying to reverse.

Qasr Azraq has had a long and diverse life: It was a Roman fort in the 3rd century; Umayyad fortress and hunting lodge in the 8th; a fort used by the Mamelukes (slave soldiers converted to Islam) in the 13th; and an Ottoman Turkish garrison in the 16th century. But its modern-day claim to fame was its use by legendary British soldier and adventurer T.E. Lawrence and Sharif Hussein bin Ali in the winter of 1917-18, during the Great Arab Revolt against Ottoman rule.

This immense square structure has walls that are approximately 260 feet high (80 m). The central courtyard is encircled by numerous storerooms, stables, a prison, a kitchen and a dining room. In the stables, you can still see tethering rings for horses and camels, and mangers.

Lawrence of Arabia lived in a room over the main entrance. In the vaulted entry below his room are paving stones with indentations where countless generations of gatekeepers played a board game using pebbles. Near this entry is a small Roman altar used 1,800 years ago and, in the center of the courtyard, a mosque built atop a Byzantine church.

Midway between Azraq and Kharana (and about 50 miles or 80 km from Amman) lies Amra, the most unusual of the three desert castles I visited. One of Jordan’s three UNESCO World Heritage sites (the other two are Petra and the archaeological site of Um er-Rasas), Amra redefines what “getting away from it all” means.

Built in the early 8th century by Umayyad caliph Walid I, this exceptionally well-preserved desert castle was used as a fortress with a garrison, as well as a residence for sport and pleasure.

Images are forbidden in Islam. However, as I enter Amra’s reception hall, I am overwhelmed by figurative murals reflecting the secular art of the time — the most outstanding features of this comparably small pleasure palace.

On the right hand wall is a mélange of wrestlers, hunting scenes, an Umayyad caliph with a Byzantine emperor and a Visigoth king, among other characters — even an almost-naked woman bathing.

Frescos on the left wall depict a hunting scene with dogs driving onagers (now-extinct Persian wild asses) into nets. Semi-clad women are painted on the arches supporting the vaulted ceiling.

The adjacent hammam (bath) with its triple-vaulted ceiling, a testament to Roman influence, is also filled with magnificent paintings, including one in the caldarium, or hot plunge bath, that depicts the heavens with the signs of the zodiac and the constellations.

Kharana, Azraq and Amra are among the most-important, best-preserved and most-easily-accessible desert castle ruins dotting Jordan’s eastern desert. If you have time for a few more, I would suggest visiting Qasr Mushatta, the largest and most ambitious of the Umayyad palaces in Jordan, 18 miles (30 km) south of Amman and just north of Queen Alia International Airport. Another good option is Hallabat, 33 miles (53 km) northwest of Azraq.

To reach Kharana, Azraq and Amra, it’s best to rent a car or hire a car and driver, as we did. Our day excursion was arranged in advance by FreeGate Tourism (www.freegatetours.com) before we left home. Arrangements can also be made by hotels in Amman.