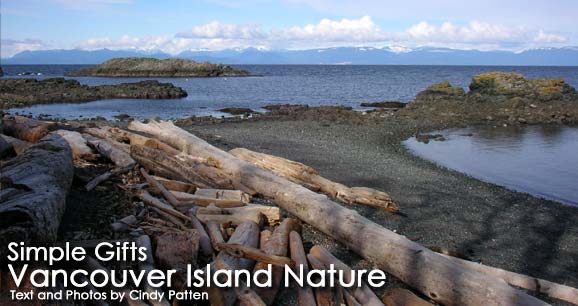 When our dear, genteel Texan friend, David, called one golden August morning to say that he was in Vancouver, British Columbia, and would fly to Nanaimo for a visit, my husband and I were immediately thrown into hosting panic.What wouldwe do with him? How would two “humbletons” entertain the sleek urbanite in our hometown?

We decided that a good visit begins with steaming cups of Tim Horton’s coffee and a nature walk along wooded paths that shed their color palettes seasonally: luscious leafy greens in spring and summer to autumn’s splendid harvest oranges and yellows to the frosty silvers of winter. Slender alder trees strain skyward to compete with sturdy maples, lichen-laced oaks and bushy evergreens for photosynthetic dominance.

Whether bathed in the sun’s honeyed rays or smothered in West Coast cloud and drizzle, this is the best of island living. We hoped it would be a real treat for someone who had not set foot off concrete and tile (evidently) in decades.

In Nanaimo, many of our grassy-knolled parks curve softly, like gentle smiles, along the rocky ocean coastline. Neck Point, overlooking Georgia Strait to the east, is just such a park.

Here, the panoramic sensations of the vibrant ocean ecosystem grasp you. Strong sea breezes tangle your hair like a rough-handed uncle.

Spiraling eagles cry piercingly to warn against marauding assassin ravens, the tricksters of First Nations lore. The floral aroma, a blend of brine and wild rose and blackberry, intensifies the cool air with a mysterious, spicy elixir.

Flotillas of webbed, finned and flippered marine life perform “aquabatics” in the frigid aquatic milieu. Dolphins skip through the steely blue waters at play, and the occasional pod of orca whales bears down hungrily on shining salmon. A basking rogue sea lion belches and barks its territorial rights to the world.

Shy, smoky-eyed seals stealthily observe the action from offshore, peering curiously from between the feathered flanks of brown-and-white Canada geese and pewter-gray seagulls bobbing in the chilly waters.

After our morning amble, we finished off our coffees and caught up at a picnic table overlooking Shack Islands, a small clutch of 20 or so paint-peeled shacks clinging to rocky outcroppings adjoining Piper’s Lagoon. Built early in the 20th century by dirt-poor workers determined to avoid land taxes, inhabitants would row ashore in small dories for work.

Today the cottages are used as summer residences by direct descendents of the original builders. When the land bridge is submerged, they too must paddle across to stock up on supplies. For this privilege of straddling 100 years of history, they are content to go without electricity and running water. Only essential maintenance is allowed for these dwellings. When at last they crumple to the ground from age or accident, a sliver of British Columbia’s history will wink out forever.

“Where would you like to go next?” we asked David. He thought for a few long seconds and we waited, hearts thumping in our mouths. Was he bored? Did he want to go back to the city already? Was he going through concrete jungle withdrawal? Did he have cabin fever?

We were elated: Skyscrapers we could not do, but big trees — yes.

Forty minutes north of Nanaimo is Cathedral Grove: 336,000 acres (136,000 hectares) of provincially protected old-growth forest and a safe refuge for enormous cedar, hemlock and fir, many of which were in their gangly youth when Christopher Columbus arrived, lost, in 1492. The most ancient of these trees are around 800 years old; the largest more than 27 feet (9 m) in circumference.

While Cathedral Grove may be the most-accessible old-growth forest on Vancouver Island, parking is often congested, and requires patience and precise maneuvers. Once inside the lush pocket of rainforest, space seems to expand as if under an enchantment. The towering, venerable colossi exude titan authority over the park and everything in it.

Every sound and movement is absorbed by their quietly imposing greatness. A mighty gale in 1997 wrestled 10 percent of these trees to the ground overnight, but even the fallen are awesome.

In parody to my musings, a tiny gray deer mouse, no taller than the sole of my hiking boot, perched on an exposed root at the foot of an enduring splintered stump, regarding us soulfully through large, black-lashed eyes. Sitting on teeny haunches, it nibbled crumbs from my blueberry bran muffin, delicately holding the morsels between its minute paws.

David wandered in devotional silence from tree to tree, stopping occasionally to lift his face heavenward, serenely introspective. In answer to our inquiring looks, he simply smiled and said that he felt connected.

For me, one British Columbian experience is more emotionally arresting than the majestic serenity of Cathedral Grove: spawning salmon. At the end of their life cycle, salmon defy every obstacle to return from the ocean to the river of their birth to reproduce, and shortly thereafter, to die. A further half-hour north we parked alongside the swirling Somass River, then walked downstream to Stamp Falls.

It was the end of the line for us, a wire fence erected to preserve public safety discouraging our passage. The salmon, however, redoubled their efforts and bombarded the roaring falls. Repeatedly they thrust their gleaming silvery and red bodies into the air, beating and flailing against current and gravity. We watched for 20 minutes without witnessing a single success (except for those who found the fish ladder), yet were inspired.

The clock was rapidly ticking toward the last flight back to the mainland. Wiping tears from his eyes, David unwillingly conceded that he must return to his busy life, which had until now seemed intimidating and very foreign to me. It had been a lovely visit, filled with friendship and laughter and new understandings.

Left with wonderful memories, we hugged goodbye and watched, glumly, as his tiny sea plane chugged out into the harbor before buzzing away to the mainland metropolis.

As time has passed, I have come to ponder the deeper meanings of our brief sojourn with a treasured friend. Indeed (outside of the park, of course) — what are we looking for? I’m sure the aged giants of Cathedral Grove know the answer … maybe if I listen deeply to their twilight whisperings, I’ll learn the secret, too.

Nanaimo is a 1 hour–and–35 minute ferry ride from Horseshoe Bay on mainland Vancouver, or a 25-minute flight from downtown Vancouver.

Luxury Travel: Traveling in Style with Fewer Costs
Next Post: At the Killing Fields: Revisiting Cambodia’s Past