Some years ago, a famous female correspondent and pioneering consultant on gender issues was invited to the Middle East to work on post-conflict reconstruction. She rang up her friend, the fashion editor of a big woman’s magazine, and popped the question: what on earth should she wear?

“Pink combats,” replied the oracle. And that’s how the correspondent was so often mistaken for one of Gaddafi’s personal bodyguards, the only other women (people?) in the Middle East who wore pink fatigues.

My recent visit to the Kingdom of Saudi Arabia followed a similar trajectory; jumping right in at the shallow end, and paddling in circles.

As research associate and freelance writer/photographer, I accompanied a UK thinktank to Riyadh, to chronicle the trip.

Invited by the Saudi government and sponsored by the Saudi British Friendship Group on a short study visit to meet key players in the bilateral relationship and discuss topics from social reforms to international defense interests, we had to prioritize. Syria, Gaza, Egypt, Iran, South Yemen; the pressing list of regional crises must wait till we’d sorted out: What will the women wear?

This is an intimidating place for a first visit. The British Embassy in Riyadh is keen on British ladies wearing abayas, although the Saudi Embassy in London doesn’t make a fuss. 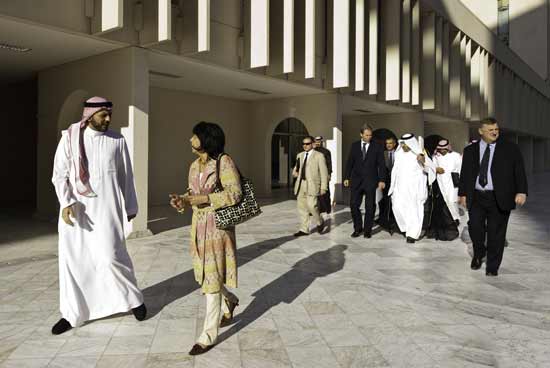 I didn’t want to wear an abaya, which I think oppressive – physically, psychologically, and symbolically – but I did want to be safe, show respect, feel comfortable and avoid giving offence.

Having travelled in several Muslim countries, I’ve experienced the approval a Western woman gets from men there when she dresses modestly.

I also adore dressing up.

So I created my own fantasy version of appropriate Islamic dress out of loose flowing gowns, slightly outsized, long cardigans, bits of lace and manila, silk scarves and fine cotton shawls.

This is flamboyant, but not flippant. It’s not intended to insult women who wear proper Islamic clothing, of whatever degree.

At my hotel, an international chain with an American flavor, I do see several white Western women in full abaya, heads bare at breakfast but ready to wrap up for the outside world.


I detect a certain kind of fancy dress glee in their wearing this garment. Maybe that’s only possible when wearing it is not compulsory, habitual, and absolutely critical and central to your whole functioning as a citizen of this country.

My alternative costume makes a fine distinction, which may be decipherable only to me. By rejecting a garment which is obligatory for women here, yet accepting that it is customary to be very modestly dressed, I feel I’m asserting my right to adopt a voluntary code, instead of accepting a statutory duty.

Looking at the Saudi men I meet, they are, with the exception of faces and necks, as covered as any woman in an abaya.

Like the monotonous black of the women’s costumes, the mens’ shining white djellabahs and red and white check headscarves show more uniformity than variation.

In the low seating of a traditional Saudi reception, they look more comfortable and elegant than our Western men, whose business suits bunch up at the shoulders and between the jacket buttons, and show far too much sock.

My only moment of doubt comes when, discarding my shoes to sit for pre-dinner conversation, I remember that I’m not wearing socks, and wonder if I am committing some dreadful breach of etiquette by displaying bare toes.

Never mind. Trailing gowns have many uses. I sip my cardamom coffee with a straight back and clear conscience, tucking bare toes into my hem, snug as a family of baby mice.

African Adventure: In Search of the Mountain Gorilla in Uganda
Next Post: Hiking Volcanoes in Guatemala