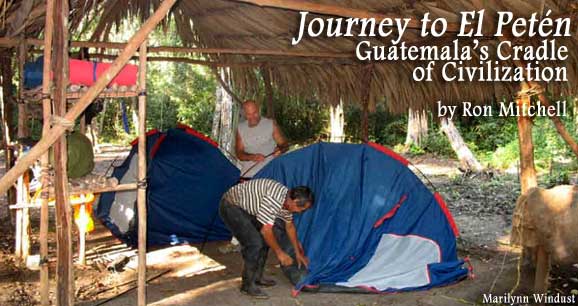 We rest after a day of strenuous hiking and listen as one of our guides, Maria, sings a Spanish song while she molds maize tortillas. She places them on a rusty sheet of iron atop small adobe mounds that resemble mini Maya ruins. Wood embers glow underneath.

As darkness descends upon the Maya Biosphere Reserve here in Guatemala’s northernmost region of El Petén, the song of insects and critters fills the air of this intact tropical rain forest.

Sixty-year-old José, our other trail guide, smiles toothlessly and leans his head against a rock pillow for a rare rest, after leading our group of three through this muddy lowland jungle with the agility of a wildcat. Soon, he tends to three pack horses and two saddled horses, before pitching tents to bed down for the night. The riding horses serve as emergency relief in the event of injury or simple exhaustion.

My wife Mare and I, along with brother-in-law Mike, had to dig down deep for strength. After seven straight hours of hiking through mostly knee-deep mud, we learned to either keep moving or sink. Deep in the jungle we have no communication with the outside world.

Nobody has a cell phone or GPS (Global Positioning System) receiver. A nine-hour day of mudding tomorrow promises to bring us to the ancient metropolis of El Mirador, where we will explore the unexcavated ruins believed to be the highest pyramids in Mesoamerica — El Tigre (180 feet; 55 m) and La Danta (236 feet; 72 m).

Initially we had planned to spend time on the numerous one- or two-day excursions available throughout the Northern Péten area. However, a guidebook passage challenged us, noting that the trek to El Mirador was “not for the faint of heart,” with “rudimentary conditions” (no toilets, beds, no cold beverages in the humid heat); relentless biting insects; and knee-deep mud; yet it was mentioned as an “unforgettable journey.”

It sounded like a good idea at the time, but now we feel that we might be in over our heads.

Maria and José stopped chicle farming several years ago to work as local guides. We met them in their small village of Carmelita, close to the Mexican border. Carmelita is one of the main local gateway communities and our departure point for the organized five-day hike through about 20 miles (32 km) of uninterrupted jungle to El Mirador.

The Global Heritage Fund is trying to protect 525,100 acres (2,125 km²) of rain forest as an Archaeological and Wildlife Preserve in the heart of the Maya Biosphere from logging and looting, in part by making it more lucrative for locals to work as guides rather than to extract chicle, resin used for making chewing gum, from chicozapote trees.

According to the World Wildlife Fund, the entire Maya Biosphere Reserve, a nature reserve about twice the size of Yellowstone National Park, has lost 70 percent of its forests in the last 10 years. Securing UNESCO World Heritage designation for the area is another goal.

At camp, José tells me a long tale in Spanish. Our guides speak Spanish only, and I speak Spanish like Tarzan. We laugh together, slap each other on the shoulder, hug and kiss cheeks and form a nonverbal bond, instead.

We laugh while moving gingerly on sore legs under a palm-thatched shelter. Maria hands us fresh tortillas wrapped around left-over lunch baloney and scrambled eggs. She laughs with us.

Sweaty, stinky and sticky, Mare and I retire for the night on a thin foam roll inside a small tent. Howler monkeys rummage around the campsite. It’s too hot to sleep and too dark and scary outside the tent. A cool rain soothes us into slumber at around 2 a.m. in the morning.

The 6 a.m. wake-up call comes quickly. Little things, like brushing your teeth, become quite a chore when using water sparingly. It strikes me as an irony to haul water into the rain forest.

Saintly Maria has coffee ready, along with a mixture of oatmeal and hominy. We hike in the soothing rain and prepare mentally for more hours of sore legs. Of course, the rain produces more mud.

We attempt to avoid the pools of water that fill the three-foot-deep (91 cm) postholes the horses’ hooves leave behind. Thick jungle borders each side of the swampy trail; we grab trees with one hand and swing around each step.

We keep one eye on the forest, especially after the first grab of a thorny tree. The other eye focuses on the mud, where strategic placement of a step takes precedence. Our hearts pound as if running a marathon while sweat soaks every inch of skin.

We laugh when the horse’s hooves pull from the mud and make gunshot sounds. Or when Mike cannot walk any longer and José puts him on a pack horse, and then a vine wraps around his neck and pulls him flat onto his back into the mud. Twice.

“Lodo! Lodo! Mucho Lodo!” (“Mud! Mud! Lots of mud!”) becomes our chant. We stop only for lunch — canned tuna on maize tortillas, which tastes much better than it sounds.

Finally we reach El Mirador. José and Maria have barely broken a sweat, yet we can hardly bend to remove our mud-caked hiking apparel to slip into shorts and sandals.

From out of nowhere, we hear a helicopter. Maria and Mare run up a steep hill toward it. I try to run but cannot, so I limp along with Mike.

A group of archaeologists from Boston exit the chopper. “Hello, I’m Dr. Richard Hansen,” a tall, muddy footed man in a beige jungle outfit says. We all introduce ourselves.

Dr. Hansen looks at Mare’s rash-covered legs and says, “There’s a cure for that. Bite on a stick and spray insect repellent on the rash.”

Mare takes his advice. It helps a bit.

After another night in tents and a breakfast of cabbage soup and coffee, we climb La Danta and El Tigre, up-to-18-stories-high jungle-covered hills hiding unexcavated temples underneath. We stand on small limestone platforms on the top and see an infinite canopy of trees in all directions.

Several mounds are all I can see of this earliest and largest preclassic Maya archeological site that at one time housed 80,000 residents in 26 cities linked by highways.

According to the Global Heritage Fund, Mirador’s spectacular monuments are more numerous and larger than those found at nearby Tikal National Park, and predate the Classic Maya sites of Tikal by 800 to 1,200 years.

The cities are believed to have been abandoned around A.D. 50, and they were only rediscovered in 1926. Scientists consider El Mirador to be the “Cradle of Maya Civilization.” The Global Heritage Fund plans to restore eight of the major temples in the complex.

Maria lights logs in the Maya ruin oven while I help José pitch the tents. The next morning presents us with two more days of mudding our way back. We have become champion mudders as we face nine hours of mudding on the fourth day and seven on the fifth. Finally we reach Carmelita.

Here we meet the families of our new friends and share a meal of grizzly thin steak, along with laughs and hugs. José and Maria will lead another excursion in two days. Mare, Mike and I and I jump into a van for the three-hour, bumpy ride back to the city of Flores, capital of Petén, about 50 miles (80 km) away, for a long-overdue shower.

We made all arrangements for this through the Tikal Connection. The price is US$ 367 per person for a group of three trekkers; the more people in a group the better the rate. January through August is the best time for the hike, as other months are even more wet and rainy.