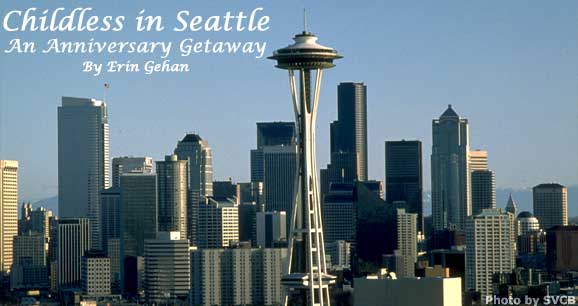 My husband Don and I planned our 10th anniversary getaway without concern for the usual focus of our leisure — our two young daughters. We chose Seattle seeking coffee, cutting-edge music and the contemplative Puget Sound.

Maybe I had been reading too much of Irish writer C.S. Lewis’ “Chronicles of Narnia” (an English children’s classic about a magical kingdom) to my kids, but boarding the plane felt like stepping into my own Narnia. A land of grown-up pleasures and freedom away from my beloved ball (Meg, age 7) and chain (Carolyn, age 5). Carrying only a slim purse onto the plane, I nestled next to Don and relished the idea of six hours in seat 24B on the flight from New Jersey to Washington State.

A family with two little girls filed in behind me. Behind my seat, the mom opened her arsenal of treats and toys designed to keep the kids busy. Our family calls it “the diversion bag.” I gave her a supportive smile that said, “Even if your bag of tricks doesn’t keep those kids quiet, I’m not the type of passenger to develop rage at high altitude.” It was true. I scarcely noticed the gaggle behind me as I attended to my book and my daydreams. My heart grew fonder by the hour.

The first hint of missing the kids was by the baggage claim. A little girl jumped up and down when she spotted her rolling Disney Princess luggage approaching on the carousel. I pointed, “Think of how Carolyn delights in each push of a hotel elevator button.”

“Erin, I picked our hotel because the Beatles stayed there when they visited Seattle in 1964,” my husband replid. “John, Paul, George and Ringo fished in Elliott Bay from their hotel room window. The Hotel Edgewater’s charm would be lost on our kids.”

Soon we arrived at our hotel along Seattle’s legendary waterfront, and Don escorted me into our room. Was that a flicker of romance in my loins or an ache in my uterus for the daughters left behind? Likely the latter, as our room’s lodge décor included a teddy bear on the bed and a massive grizzly bear footstool. It was midnight New Jersey time and I longed for sleep.

During a quick stop in the bathroom, I met a rubber ducky wearing goggles and a bathing cap. “Goodnight, ducky. I know you’re trying to be the Ghost of Children Left Behind, but I’m not going to fall for it.”

The waterfront’s streetcar bells awakened us in the morning. Yes, by opting for the cheaper “City View” over “Waterfront Room,” we had booked accommodations overlooking the trolley imitated on Mr. Rogers’ Neighborhood (the train to the land of Make Believe in America’s longest-running children’s television program). I smiled. I had packed the wooden trains when I sent the girls to my parents for the week. Our daughters would never know they missed THE REAL THING in Seattle.

Having left our Family Fun Vacation guides at home, we cracked the binding on our grown-up guidebook, Access Seattle, and it directed us to Caffé Minnie’s for breakfast. Access promised a funky greasy spoon serving Seattle’s 24-hour crowd. We thought we’d dine with musicians pulling all-nighters. Instead, we dined with a poster for the Shipwrecked! exhibit at the Children’s Museum of Seattle on the wall. Across from me and above Don’s head, a six-year-old on a placard smiled, promoting the annual Bubble Festival at the Pacific Science Center.

We chose instead a visit to the city’s most famous symbol, the Space Needle. Built for the 1962 World’s Fair, the Space Needle has been likened to a flying saucer sitting on a towering tripod. To get there from Minnie’s, Don and I weaved through the Fun Forest Amusement Park. Having lived my entire life near Manhattan, I never had imagined carnival rides in the center of the city. Rushing past the ubiquitous billboards for the IMAX adventure, Scream Machines: The Science of Roller Coasters, my husband grew concerned about me.

Young families swarmed around us. Could this be a typical Saturday in Seattle? We realized it was not when we saw the sign behind the inflatable dinosaur ride reading, “KidsFair: A free day of fun at Seattle Center for kids ages 4-10. Inflatable rides, stage entertainment and creative activities for kids and parents.”

Don ushered me into the Space Needle. Typically stingy with souvenirs, we filled a shopping bag with Space Needle gifts before boarding the elevator.

Once atop the 605-foot-high (184 m) Needle, I ordered a grande latte and Don moved into his museum mode, where he stops rushing through life and reads each display’s every word. We avoided giggling children, the staff in their space-age costumes, and the Needle’s family fun facts. It took focus, but we enjoyed our morning and didn’t leave until a cloud engulfed our perch.

Since we had dinner reservations at the romantic Pink Door restaurant, Don and I decided to grab a quick lunch in the Seattle Center. Steering away from any venue with hot dogs or chicken nuggets, we entered a Starbucks. In a bizarre Alice-in-Wonderland-esque experience, the Starbucks storefront was just that — a front. It opened onto a tremendous food court teeming with families and enlivened by a Kids Stage. We snatched a table (two-tops were not in great demand). Unfortunately, our table overlooked an opening in the ceiling of the Children’s Museum where we watched boys and girls running in and out of a nature exhibit while we hurried through our chicken pesto wraps.

We stopped next at the Experience Music Project (EMP) built by Canadian-born architect Frank Gehry. EMP, a participatory museum of music, is housed within a building that has been likened to a rock ‘n’ roll song translated into sheet metal. If I had any illusions that my Meg and Carolyn might enjoy this, they were erased when I overheard two girls walk up to their father in the lobby asking, “Hey Daddy, when are we going to do something fun?” Had I finally found the place to begin my getaway?

While outfitting us with a Museum Exhibit Guide (MEG) a staffer explained, “We’ll hang this MEG around your neck and it will be your interactive companion throughout the galleries.” Wearing this device formed like a guitar, visitors design their own tour by pressing the keypad to start interviews or music clips on areas of interest in the exhibits.

Strangely, the Exhibit Guide doubled as a high-tech parental withdrawal device. I can best liken the MEG to the baby dolls that high school girls are assigned to carry to understand the burden of a having a child. After four hours at the Experience Music Project, I was ready to tear off the MEG and escape untethered from both it, and my daughter Meg, whom I had been saddled to for seven years.

My husband and I walked hand-in-hand back to the Edgewater. I was ready for a cocktail in the room where I polished my toenails while my feet rested on the grizzly bear. Then Don and I boarded the waterfront streetcar to the Pink Door. I scribbled a postcard from there letting the girls know what a great time we were having without them… 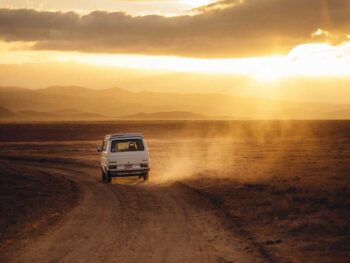