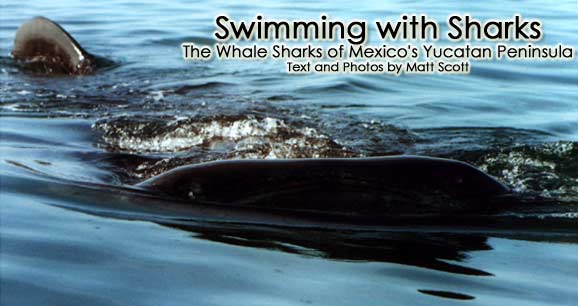 The fin is directly in front of me, perhaps 30 meters (100 feet) away as it breaks the surface of the water. Behind the fin, a tail moves slowly from side to side, propelling the shark forward. The boat I was in is a short distance away, and everyone on it who has decided not to jump off yet is shouting or pointing, looking at what is coming toward me. Maybe I should have stayed on board as well …

It was just after dawn when we boarded the small fishing boat and left Isla Holbox. We were headed out to where the Caribbean Sea and Gulf of Mexico meet.

Located northwest of Cancún, Isla Holbox is a 26-mile-long (42 km) Mexican island separated from the mainland by a shallow lagoon, just a 30-minute ride in a water taxi from Chiquila on the mainland.

The mixing currents in this area and the nutrients they bring cause plankton to bloom, turning the normally crystal-blue waters into a murky brown. These tiny life forms attract a variety of marine life. Hundreds of small rays swim around the shallows between the small lagoon islands, and frigate birds and pelicans perch in the trees while several flamingos search for food just off shore.

On the horizon, a small wave approaches. As it gets closer, the bodies of a thousand sardines glisten in the morning sunlight. We don’t stay long here, however; we are in search of the biggest fish around.

There were no nets or rods on our fishing boat turned excursion craft. The local fishermen abandon their trade for a few months each year to provide transportation for curious tourists like us — six backpackers on holiday in the Yucatán.

The seasonal bloom of plankton attracts an elusive, yet incredible creature, and we catch our first glance less than an hour after leaving shore. The boat’s engine stops and I’m given the “all clear.” My partner is still struggling with her mask and snorkel, but I’m too impatient to wait, and dive in.

And here I am, by myself, with a fin getting closer and closer. With waves splashing on my face it is hard to take deep breaths and relax. I put my snorkel in and look under the surface to see what is ahead. The water is murky and visibility is not more than a few meters, but I know the shark must be very close by now. There are a few last moments of the water around me appearing empty before I see a huge mouth starting to open.

It is over a meter (3 feet) wide and just in front of my face. I can do nothing except stare at this huge fish as it sucks in whatever comes between its jaws and wonder if I will meet the same fate.

But the ocean giant dives slightly and swims underneath me. I watch as more than 12 meters (39 feet) of its rough, spotted body swims just below the surface. I have to move to avoid the huge tail fin as it slices through the water next to my side.

While the whale shark appeared at first to be moving slowly, its tail quickly disappears into the murky water, and I try to follow. Looking above the surface, and taking what seems to be the first breath in a long time, I can see its fin moving slowly away.

My only injury from the encounter: a small graze across my chest where the shark’s rough tail has brushed against me.

Whale sharks are fish. The only similarity to whales is in their size: The largest are up to 18 meters (59 feet) in length. Whale sharks are filter feeders, ingesting only plankton and small shrimp. While they have rows of tiny teeth, there is not a sharp tooth in sight. It’s still an exciting and humbling adventure to swim with one.

The seas off the Yucatán are one of the few regions in the world where annual visits from these giants can be expected. In an effort to ensure they return, strict rules are in place to protect the marine animals. Boats must stop their engines when close to the fish, and must not follow their course. You are not allowed to touch the shark, and only two people are allowed in the water at one time.

As I climb back on board, the whale shark has disappeared into the swell. The boat starts up and we search for others — not a difficult feat, as it’s estimated that hundreds migrate to the area. As we motor gently across the waves a white flash catches our eye just a few hundred meters from the boat.

A huge, white body ejects itself from the water and lands with a tremendous splash. It’s a manta ray, at least 4 meters across (13 feet), performing its fascinating mating ritual. The boat speeds over to the approximate location, but the manta has long disappeared.

Feeding on plankton, manta rays are often seen in the same area as whale sharks — two giants of the sea in one place. While we saw dozens of whale sharks by the end of the day, this was to be our one and only manta.

Whale sharks visit the Caribbean for only a few months a year, between June and September, but a trip to the area is a treat at any time. Isla Holbox and the islands nearby are idyllic retreats. Without large hotels, the islands boast top-class water sports and nearby wildlife preservation areas.

Day trips to the Yucatán offer sights such as the colonial town of Merida, the Mayan ruins of Celestun and Chichén Itzá and the nightlife of Cancún. There are also miles of palm-fringed beaches where blue water meets snowy white sand. Just be careful if you go swimming — you never know what you might see.

The main Yucatán Peninsula airport is in Cancún. Chiquila, where water taxis offer service to Isla Holbox, is about 2.5 hours northwest by road. Several hotels provide transportation between Chiquila and Cancún, if you make arrangements in advance. Private transport from Cancún to the island is approximately US$ 75. There is also a small airstrip on the island; most flights need to be organized by hotels on or near the island.

All hotels on the island are built in harmony with their surroundings, and are within a stone’s throw of the beach.

Faro Viejo is one of the most reasonable hotels; all rooms have air conditioning and balconies overlooking the sea, from US$ 50.

Whale sharks are migratory, and finding them can never be guaranteed. They usually visit the Gulf of Mexico between June and September. As tours are made by local fishermen and not tour operators, the best way to book a trip is to organize it through your hotel; all hotels on Isla Holbox offer this service. A full-day tour with box lunch, all equipment included, typically costs US$ 90, although prices can be negotiated with some operators.