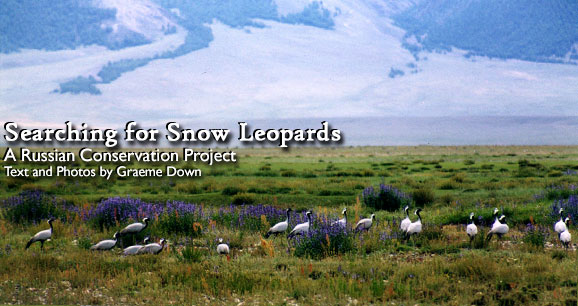 Don’t look at the cheese, I told myself.

It was a tense moment in the yurt. I’d finished my fourth bowl of tea, and our host, Gulinara, was offering more of the strong, homemade version of Parmesan around. To refuse would be impolite, of course, but since I didn’t speak a word of Russian, to refuse was downright impossible. The cheese was very strong, very salty and was served in huge chunks.

The table in the center of the warm, hide-bound yurt was crammed with goodies —sweets, cream, butter, fried potatoes, meat — and most of us sitting on tiny perches around the low table were getting liberally dosed with vodka. Since I was driving the Land Rover back to our base camp, I was not drinking. As “designated driver” is not a concept recognized on the steppe, I had to become “allergic” to the spirit.

We were in the Altai, an astoundingly beautiful region of steppe and rugged mountains situated in the far southeast of Russia, close to the Mongolian border. Semi-autonomous within Russia, this republic is not somewhere many foreigners reach, and I was lucky to be on an organized trip with Biosphere Expeditions.

We were here to survey snow leopards, prey animals and any other wildlife we happened to come across. The group consisted of 12 volunteers, a British expedition leader, a Ukrainian scientist and a half-dozen Russians who would be our interface with the local people and environment.

We were visiting the yurts because families like Gulinara and her family live a semi-nomadic existence and are invaluable sources of information on snow leopard movements and prey animals, since it is they who see them most often.

Biosphere has focused on snow leopards, as they are endangered worldwide, with perhaps just a few thousand remaining, scattered across tracts of mountainous country throughout Asia. Only 50 to 100 are thought to exist in Russia, and our chances of seeing one were very slim indeed, as was made abundantly clear at early briefings.

The Altai, with its steep, rocky ridges and high-altitude valleys, is an important corridor for leopard movement between populations, so any data we gleaned would go toward helping establish protection for them in this region.

If I had to pick out a particular highlight, it would probably be the finding of an ibex and argali trail crossing a ridgeline at 10,500 feet (3,200 m). Argali are wild sheep and, together with ibex, they make up major prey items in a snow leopard’s diet. In this region they are also scarce, and we found few fresh signs of these wary animals.

By this point, we had acclimatized to the altitude and the strenuous exercise. Our debut climb began after driving two hours from camp along bouncy tracks and across boulder-strewn rivers. We reached a quiet valley with grassy hills rising all around.

Clambering up the slopes, we soon forgot our aching limbs, and started developing our tracking skills. It took me a while to get into the subtlety of picking out signs of animal passage, but eventually some neatly cut white gentian stems caught my eye. Volodya, our Ukrainian scientist, ambled over to take a look.

“Ah yes … pika,” he murmured, taking a GPS reading. Pikas, it turns out, are little rodents that chew through flower stems, hoarding the material for the cold winter. While large animals were elusive, wildflowers were in abundance, with gentians, edelweiss and members of the onion family, to name but a few easily identified ones.

The air teemed with flitting grasshoppers, flashing bright red wings, and fritillaries danced among the meadows.

The next trip found us striding up through dense larches behind our campsite, the deep moss springing underfoot making the ascent doubly hard work. Beyond the tree line, rocks continued all the way to the distant horizon, which appeared to be at 45 degrees from where I was standing. Frequent pauses for breath and water helped us all reach the top.

On the way we carried out “relative abundance” surveys, fanning out into a line and recording all animal signs over a set distance. We were all feeling like professionals by now. As well as droppings, we were now spotting tracks and occasional signs of vegetation damage, such as that made by wild boar.

Not all excursions involved arduous trekking. One morning was spent at a marshy lake teeming with wading birds and ducks, calling among the pools. Nearby, flocks of supremely elegant demoiselle cranes graced the nearby grassland.

On another occasion, I set off with a few others to survey the base of the tree line near camp for bird-of-prey pellets. As I had carried out various bird surveys back home in the U.K., they had made me the “bird expert.” My authority status under scrutiny, it was a relief to actually find some.

Even at our camp, eagles were pretty common, while a black-eared kite frequently circled over our little settlement. Ground squirrels scampered among the tents and, from time to time, “Boris” the marmot waddled out onto the slopes above, to be finally caught by Victoria’s diligent photography efforts.

Of the small mammals, the ground squirrels were easily the most abundant, but in order to see some other creatures, a night foray was necessary, so we set forth in an old white minibus to go hurtling across the plains as lightning flashed over the hills. We were looking for jerboas, or kangaroo rats, and sure enough, a fair number of these strange-looking creatures hopped into the beam of the headlights, where they became mesmerized, allowing us good views.

Snow leopards remained elusive, though we kept scanning the rocks in a vain search. Although large animals, they have an amazing ability to blend in with their terrain. Signs of carnivore were found, but it was impossible to be sure what they were. (Wolf or manul, a smaller cat species, were possibilities.) These samples were not discarded, but were bagged up to be analyzed by biologists back in England.

Any tiredness was alleviated by being part of a lively group fueled by local vodka. On one day, the local herders were invited over for a party, where old Nicholi, at the age of 72, drank a half-liter of vodka, then wanted his pulse checked! After many fulsome toasts in the mess tent, what could follow more naturally than a spot of Scottish country dancing (our Scottish leader Tessa’s idea).

Abai, one of the locals, out-danced us all, especially when the tunes — played on the stereo of a rather battered old van owned by one of our Russian drivers — turned to Russian disco. The herders left by evening, then it was time for the usual routine of donning extra layers and huddling around the campfire, kept going by Chris, an expert at pyromania. Although warm in the day, even in August, nighttime temperatures plunged to near freezing, and we even experienced an occasional blizzard.

All too soon it was time to depart on the 620-mile (1,000 km) journey back to modern civilization and the city of Novosibirsk. There was still fun on the way, with stops to buy the gorgeous local honey, munch some fruit-filled pancakes and sample a Russian banya (sauna) at an overnight stop.

But I didn’t bring back any cheese.

The Biosphere Expeditions meeting point for this excursion is in the city of Novosibirsk. Most flights to here connect in Moscow. Aeroflot operates the majority of internal flights.