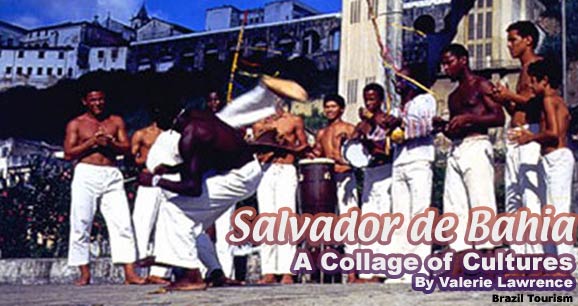 The ride from the airport to the city of Salvador de Bahia, Brazil, gives no hint of what lies ahead. The highway is flat, free of debris. Plush foliage mixed with colorful blossoms dot the landscape, and palm trees reach to the clear blue skies. No ocean is visible. No houses spotted. No people. Suddenly the driver turns off the paved street onto a dirt road that runs through the middle of a tiny village, clustered with discolored wooden houses. Pedestrians mill about. Children walk with backpacks and lunch boxes in hand. Vendors sell fruit. As quickly as we entered the village, we exit to the paved highway.

Where is this place shown so colorfully in the brochure that I hold? There are no skyscrapers, no buildings yet. There’s only sun and the smiling, deeply tanned driver who assures us in his limited English: “Soon. Salvador.”

After what seems like an endless trip, we finally arrive. Houses are getting denser. There are cars everywhere. I see traffic lights and beachfront hotels. Vendors are whacking tops off fresh coconuts with machetes for thirsty consumers. Bathers splash in the warm ocean waters while others sleep in the afternoon sun. As quickly as we checked into our hotel, our tour guide is waiting to welcome us to the city where no one is ever considered a stranger. In Salvador, all are welcomed.

Located on Brazil’s northeastern coast and 711 miles (1,145 km) from the capital Rio de Janeiro, Salvador beckons travelers year-round. The city is situated on a high cliff overlooking beautiful All Saints Bay. Temperatures in summer months (November to February in the Southern Hemisphere) range from highs of 82-86 F (28-30 C) to lows of 71-75 F (22-24 C). The hottest days can be up to 91 F (33 C). Winter months (March through October) find lows hovering around 71 F (22 C). Take a thinly layered shawl or sweater to block the gentle ocean breeze, which can feel chilly at times.

Salvador de Bahia is one of Brazil’s largest cities. It was the first capital from 1549 to 1763. Today, about 12 million people live here. The majority are descendants of African slaves brought here from 1549 on to work on the sugar plantations. In 1558, Salvador was the location of the first organized slave market in the New World and it was not until 1888 that Brazil outlawed slavery, the last country on the American continent to do so.

Salvador is the “black heart of Brazil.” But not only African origins are evident wherever you look. Here, culture is a colorful collage of European, Amerindian and African influences.

Take the food, for example. Most dishes are savory yet spicy. Try churrasco (Brazilian BBQ) andacaraje (pronounced: ah-car-Rah-jay), which is a bean patty with special sauce and shrimp. Or sample a delicious seafood stew called moqueca (mo-kay-kah) sold by street vendors known as Baianas. You can easily recognize them by their layers of white lace dresses, multi-strands of consecrated colorful beads, and white headscarves. Taste buds are teased and tempted, but never bored.

The enticing sounds of Samba, Djembe and Conga drums, mixed with shakare (gourd percussion) and tambourine fill the streets as tourist and musicians dip and sway and swing from night till dawn on the ancient cobblestone streets of Pelhourinho, the most important historical center of colonial architecture in Latin America.

There’s something for everybody in this 450-year-old reservoir of historical and cultural charm. Salvador de Bahia, the capital of the state of Bahia, was declared a UNESCO Heritage City in 1985. The city has managed to preserve many outstanding Renaissance buildings. A special feature of the old town is the brightly colored houses, often embellished with fine stucco work. The restored cathedrals and convents of St. Francis, St. Dominic, Carmel and St. Anthony retain their original splendor, ornamentation and décor. The same is obvious in the Municipal Palace, and The House of Mercy. The Sanctuary of Bom Jesus do Congonhas also contributes to the architectural integrity of Salvador’s history. This Franciscan monastery displays original Spanish tiles, and the largest collection of baroque religious paintings in the country.

Salvador is also known as the “most African city” in the Western Hemisphere because it has maintained much of its West African cultural influences. This is most apparent in its Candomblé religion practices, rituals, holidays and symbols that are now an integral part of Salvador folklore and culture. The religion came from West Africa to Brazil by enslaved African priests.

Religious and spiritual buffs can visit some of the 356 catholic churches. Salvador has so many churches that it has been dubbed the “Black Rome.” Many of them were built to accommodate the racial and cultural segregation that was practiced in the early years of Salvador’s development. Step inside the Church of Our Lady of the Rosary of the Blacks (Igreja de Nossa Senhora do Rosario dos Pretas) to attend a mass at the first African church built in the New World in 1704. It was constructed over a period of 100 years. African slaves built the church at night when they had completed their duties on the plantations.

Drive down Centenery Avenue, a main artery in Salvador, and you will see the statues of the Orishas, deities of Condomblé. During August, experience the spiritual ritual of the Sisterhood of the Good Death (Boa Morte). This sisterhood is rooted in the time of enslavement. They worked to buy the freedom of other enslaved Africans. Each year the community of Salvador help Boa Morte commemorate their achievements. It is a time of festivity, sacredness and sharing. Many parts of the commemoration are open to the public at no cost. But the monumental happening in Salvador da Bahia is Carnavale, which will be celebrated from February 3 to 8 this year, when two million revelers and over 600,000 tourists masquerade and party. Carnival is the last party before the Catholic holiday of Lent, the 40 days that proceed the Catholic holiday of Easter.

Spanish and English are widely spoken in this tropical paradise, while Portuguese is the official language. Bahians enjoy sharing it with visitors. “Bom dia, mi amigo” (good day, my friend), “por favor”(please), and “obrigado” (thank you), are quickly learned.

For those seeking sun and sea, island-hopping via schooner on all or some of Salvador’s islands might be the answer. There are about 50 islands in the vast All Saints Bay, which covers 425 square miles (1,100 km²). Ita Parica is the largest. Allegedly, the “Fountain of Youth,” the mystical source for eternal youth, is located here. Spanish explorer Juan Ponce De Léon (1460-1521) searched but never discovered it. Many have come to look ever since. Maybe you will find it.

Every night offers a street party in Pelourinho circle. Samba until dawn. Watch locals play the martial art of Capoiera, brought to Brazil by slaves from Angola. What appears to be a dance at first glimpse, is a complex structure of fight movements. During enslavement, Africans were not allowed to fight.

Yet, under the watchful eye of their overseers they did nevertheless as they performed Capoiera. Overseers thought they were dancing rather than fighting. Capoiera continues today as an example of the shrewdness and creativity of African ingenuity.

Sip exotic drinks like Cachaca (sugar cane brandy) or Batida de Maracuja, passion fruit with sugar cane liquor. Chocolate lovers should try the Capeta. Locals call it “sweet devil.” It’s a mixture of chocolate, ground peanuts, condensed milk, vodka, and guarana, a tropical berry that grows in the Amazon region. It packs a punch, not soon forgotten. Dance to samba/reggae/African-laced rhythms played by local musicians. But try to make it back to your hotel before dawn to catch the rising sun over enchanting All Saints Bay.

Peru’s Hidden Jewel: The Manu Rain Forest
Next Post: A World of His Own: Eli Avivi