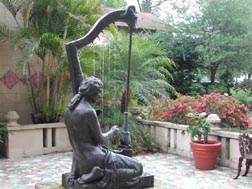 “What’s with all the fireworks up ahead?” I ask the cab driver, motioning to the sprays of gold that seem to jump into the night sky over Orlando as we drive into the city.

The man grunts and looks into the heavens, oblivious to the sight in front of him.

I point out the display, which rivals the Fourth of July, but the cabbie shrugs them off. “Oh, that’s only Disney,” he says. “We don’t notice those any more.”

That seems to be attitude of many Orlando residents. While the rest of the world flocks to this Florida town for theme parks and entertainment, the city’s residents go on about their lives, ignoring the popular venues that make Orlando famous.

While most residents are grateful for the tourism dollars that such attractions bring in, they claim that most tourists never see the “real Orlando”. “There is so much here that most visitors miss,” says Wrenda Goodwyn of Downtown Orlando.

In fact — perhaps in response to the surreal world that surrounds them — the city of Orlando and its neighboring suburbs have developed a rich and growing arts and cultural scene. This counter-revolution has been slowly gaining momentum over the last ten years.

Leading the charge is Maureen Brigid Gonzalez, a former professional ballerina who now heads up the Orlando Peabody Alliance for The Arts and Culture. Gonzalez, who danced with the Irish National Ballet in her native Ireland, has called Orlando home since 1996.

“When I came here,” says Gonzalez, “I had no idea that Orlando had all these wonderful cultural venues. But I thought, ‘There are 400,000 people in this town and they’re not going to theme parks. What do they do for entertainment?’”

Gonzalez got out the phone book and did some research. “I was amazed to find that I could go hear the Berlin Philharmonic or to the Opera or to major international art events.”

The problem, says Gonzalez, who is director of Public Relations at the Peabody Orlando Hotel, is that nobody was paying any attention to these cultural attractions. She found it appalling that that thousands of tourists visited theme parks each week, but then headed back to their hotel room for the evening, never knowing of the cultural venues the city offered.

After thinking it over, Gonzalez approached her boss at the Peabody Orlando Hotel with a crazy plan. She proposed that the city’s arts and cultural venues form an alliance, backed by the Peabody, in order to support each other and promote the “other Orlando” — both to their own fellow citizens and the world.

The result of this strong coalition has been that formerly-overlooked, yet uniquely American venues are being discovered by Orlando visitors.

One such cultural opportunity is the historic town of Eatonville, the “oldest incorporated African American municipality in the United States.” Just fifteen minutes outside of Orlando, the town is home to famed African-American author Zora Neale Hurston. The community was named by the National Trust for Historic Preservation as one of the “25 cultural tourism successes in the United Sates”, and it hosts an annual Zora Neale Festival celebrating black culture each January. This year, the event drew over 130,000 visitors.

The genteel town of Winter Park is another place not to miss. It is here, in this tree-lined, lake-filled district that the “old Florida” still exits. The Crealdé School of Art is a favorite with local art lovers, and is open to visitors as well. In addition to a lovely sculpture garden and several galleries, the art center hosts hands-on classes for anyone who wants to try their hand at photography, painting or pottery.

The Charles Hosmer Morse Museum in Winter Park hosts the largest comprehensive collection of works by Louis Comfort Tiffany, including his famed lamps, sculptures and paintings. The works are stunning, and not to be missed.

The Cornell Fine Arts Museum has over 6,000 works of art, including many American masters, while the Albin Polasek Museum and Sculpture Gardens portray works by the renowned Czech sculptor.

For families with children, a stop at Orlando’s Orange Country Historical Center is a good idea. A state-of-the-art video presentation offers Florida history in an entertaining fashion, as do exhibits like one on local rock and roll legends.

The presence of entertainment companies such as Disney is a benefit to the city’s cultural scene, says professional ballerina Heather Sanders, who also dances for Disney. “Disney draws top talent to Orlando,” she says, “and that’s a benefit us here.”

Sanders dances for the Central Florida Ballet, the city’s second professional ballet company. “There is growing interest in ballet in Orlando,” says co-director Vasile Petrutiu. In fact, Petrutiu, who danced professionally in Romania before defecting in 1981, has successfully built up three dance companies, two that are student-based and one professional.

The city also draws top commercial artists. Pam Henn, for example, spent two years drawing “Belle” in Disney’s “Beauty and the Beast” film. Now she has her own studio, The Art Room, which caters specifically to teaching art to locals and visitors alike. “I can teach anyone to draw,” she says.

When the heat gets too bad, head to the Orlando Shakespeare Festival Professional Theatre, which offers works such as Hamlet, or to the Bob Car Performing Arts Centre where operas such as La Boheme can be taken in.

The Bach Festival Symphony brings in musicians from all over the world for their yearly concert series, and locals still talk of performances by the Russian Symphony.

The small town of Maitland is home to the Holocaust Memorial Center. This well-done museum is active in education throughout Florida, and is an excellent educational opportunity for children over age 12.

It is this diverse assortment of cultural offerings that makes Orlando so rich in the arts, says Gonzales. “If you are planning a trip here, you’d be doing a disservice to yourself and your kids not to take advantage of what’s on in the arts and culture,” she says.