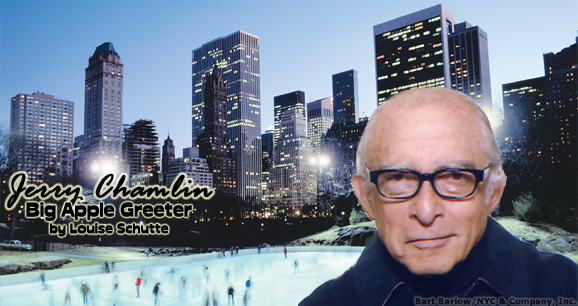 Jerry Chamlin was right on time. It was 9 a.m. sharp when he met my friend, Theresa, and me in the grand lobby of the Hotel Pennsylvania, across from Madison Square Garden and Penn Station, in midtown Manhattan.Jerry is a Big Apple Greeter — a member of an eponymous nonprofit organization that connects visitors to New York City with a volunteer New Yorker. The greeter shows travelers some of the most interesting inside secrets of the city — the small, fascinating details that tourists wouldn’t necessarily find by themselves — and it’s free.

When the affable octogenarian asked us if we were wearing our walking shoes, we understood that this wouldn’t be a leisurely stroll. Jerome “Jerry” Chamlin, a retired native New Yorker, was ready to show us almost anywhere in New York City that our hearts desired. We suggested visiting Little Italy, and Jerry recommended Greenwich Village, an area rich with classic architecture, antiques shops and row houses, situated on narrow, leafy streets.

After supplying us with city maps and Metrocards(the Metropolitan Transportation Authority provides Big Apple Greeter with Metrocards to give to visitors for use on New York City’s subways and buses), Jerry quickly crossed Seventh Avenue to enter busy Penn Station, where we boarded the subway for our short ride to Greenwich Village.

In moments we were standing in front of the smallest house in New York, a rail-thin three-story brownstone at 75½ Bedford Street that seemed to be the very definition of a “skinny” house. This narrow slip of a building — less than 10 feet wide — was the home of Pulitzer Prize-winning poet Edna St. Vincent Millay (1892-1950), famous for the line, “my candle burns at both ends.”

We cut across Bedford Street, and Jerry pointed out the unmarked entrance at 86 Bedford Street: Chumley’s Bar was once a speakeasy frequented by Ernest Hemmingway and, Jerry explained, it’s where it is believed the phrase “eighty-six it” was coined.

A speakeasy was a gangster-operated business that replaced neighborhood saloons during prohibition. If the term “eighty-six it” was used in these days, it meant the proprietor was to hide the alcohol and get the customers out because the police were about to raid the place.

During a break on a park bench at a playground, Jerry related some of the history of his beloved city and told us a little about himself and his family. This distinguished-looking, silver-haired man lives near the mayor’s mansion on the Upper East Side, overlooking the East River.

He has lived in New York City almost all his life, with the exception of a few years when he lived in a suburb in New Jersey. For more than 40 years Jerry had owned a business on Wall Street.

Jerry’s motto in life is “Just keep going.” He and his wife share a love of volunteering. In addition to his work as a greeter, both Jerry and his wife visit schools in Harlem to read to the children.

Our walk continued to SoHo, named so because it is South of Houston Street. SoHo was an industrial zone in the 19th century. The factories have since been turned into trendy lofts, where celebrities reside. This is one of the best neighborhoods in the city for shopping.

We were among many people lining the sidewalks outside of Prada, peering into the windows of one of the world’s most expensive stores. As we continued, Jerry asked us to step into a neighboring designer store to glance at prices, just for curiosity’s sake. I couldn’t believe my eyes when I read the price tag on a sweater: US$ 380. I was more than happy to walk back out of that particular boutique.

Little Italy, with its reasonably priced Italian restaurants, was our next goal. Jerry encouraged us to enter an Italian deli (a salumeria). Crossing the threshold of the store felt like we were stepping into Italy itself.

It was filled with cheeses, sausages, prosciutto, breads and pesto sauce. There were red-white-and-green flags everywhere, and the patrons and proprietor spoke in Italian.

We sat down for lunch at a sidewalk table on Mulberry Street. My gnocchi, Italian potato dumplings, were the best I had ever had. While we were eating, Jerry made many recommendations of what else to see while we were in his beloved city.

One of his insider tips was to line up at the “TKTS” booth, on 47th and Broadway, in Times Square, by 3 p.m. to get discounted tickets to one of that evening’s Broadway shows. TKTS sells unsold tickets for 25 to 50 percent off the box-office price, plus a US$ 3 service charge per ticket.

The Producerswas among Jerry’s favorites. He also referred us to a few restaurants, such as Ollie’s Noodle Shop and the Blue Nile Ethiopian restaurant.

He lost many friends on that tragic day in September of 2001 when terrorists crashed two commercial airplanes into the twin towers. Jerry did, however, tell us how to get to Ground Zero, since we wanted to pay our respects to the more than 2,700 people who lost their lives that day.

We finished our meal and made our way to a bus stop again. Jerry boarded the bus with us and continued to tell us about New York’s sights. He seemed quite flattered that my friend and I were so interested in everything that he had to say, however, it was Theresa and I who felt truly lucky to hear his recommendations.

My Day as a Booster Chair: Babysitting in a Thai Orphanage
Next Post: Roman Holiday: The Tale of La Befana