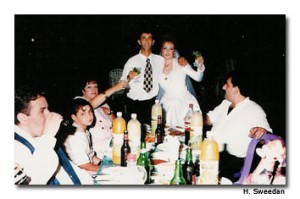 I’d been at the wedding celebration for less than 10 minutes, and I’d already kissed the bridegroom. Yes, that’s right, the groom, not the bride. It was obvious from the start that this was going to be a wedding with a difference.

In fact, this wedding is an example of why I travel — to gain experiences like this. Here I was, a Welsh Christian attending the wedding of a Muslim, Israeli Arab, while sitting alongside a group of Jewish Israelis. Different cultures can get along.

My friend Mari, the groom, is an Israeli Arab from a village in northern Israel. His bride is from another Arab village nearby. Along with some Israeli friends from a kibbutz where Mari had once worked, I had been invited to the evening celebration.

It was held at a restaurant on the outskirts of the mainly Arab populated, coastal town of Acre. The religious ceremony had taken place in Mari’s village a few days before. Custom calls for a short interval between ceremony and celebration.

The restaurant stood on the slope of a small hill, largely framed by trees, but with one side overlooking the foothills of the Galilee Mountains. In the darkness of a mid-summer evening, a faint breeze took the edge off the humidity as both the stars and the lights of distant villages shone.

The restaurant’s enormous, open-air patio was flooded with lights strewn from corner to corner and crisscrossed with rows of tables, laid out with plates and cutlery and decorated with flower-festooned candelabras. On one side, a group of musicians (no disco turntable was in sight) were playing traditional Arab music, while their front man – tall, white-haired and barrel-chested – wailed the lyrics.

Just to the right of the band, on a small podium, the bride and groom, flanked by their parents, greeted the guests. This is where the kissing took place. Mari looked a little uncomfortable in his unaccustomed, formal dark suit and tie, but his bride was resplendent in her white sequined dress, which formed a huge, silky circumference around her invisible feet.

After walking down the line of family members repeating, “Congratulations, pleased to meet you,” in my English accented Hebrew, I caught up with my friends as they were being escorted to a table by Hammada, one of Mari’s cousins.

“Anything you need, you just call me,” he told us, as he floated off among the other tables, shaking hands, slapping backs and exchanging a few, smiling words.

We started to eat. Arab hospitality is legendary. Salads, pita bread and plates of hummus were delivered to our tables by an army of white-shirted waiters. As soon as plates were emptied, they were replenished. I had presumed the evening would be “dry,” but before long, bottles of beer and glasses of whiskey were delivered to the non-Arab guests like myself

However, the appearance of alcohol was one of the few similarities with a western wedding celebration. This party was about to take a different turn. While we, the guests, ate and drank, the bride and groom remained standing, greeting new arrivals.

Some two hours into the celebration, the married couple sat down at the top table, but within half an hour they were on their feet again and descending to the dance floor. On cue, dozens of guests swept over to meet them and formed a human avenue. The band cranked up to full volume, and the couple, their arms aloft and waving, danced through the avenue while being showered with confetti.

The guests, now dancing, surrounded the couple and this melee was, in turn, encircled by another line of clapping, dancing guests who began to revolve around the perimeter. A mass of gyrating humanity was the result.

I felt I was slipping into a mesmerized, trance-like state. The music was relentless. As dancers tired, they sat down and were replaced by others. But the couple danced on regardless as the band continued to blast out its pulsating accompaniment.

After about three-quarters of an hour, everyone still standing collapsed into their chairs. Before we had time to catch our breath the waiters returned, this time carrying plates of grilled fish, roast meat and more liquid refreshment.

But before half an hour had passed, the bride and groom were again on their feet, dancing from table to table to pay their respects and for more hugging and kissing, followed by a surrounding entourage.

My other lesson for the day was that at an Arab wedding, you don’t sit back and wait to be entertained – it’s incumbent on the guests to take part in the celebration.  By joining in, the guests contribute to the joyousness of the occasion. And believe me, it’s a privilege to participate.

The Mediterranean port city of Acre (also known as Akko or Acco) is located on a promontory at the northern end of Haifa Bay in Western Galilee. When the Crusaders invaded Palestine, they made Acre their capital. Substantial remains of medieval Crusader buildings beneath the existing Moslem fortified town (dating from the 18th and 19th centuries) are still preserved in the old part of town.