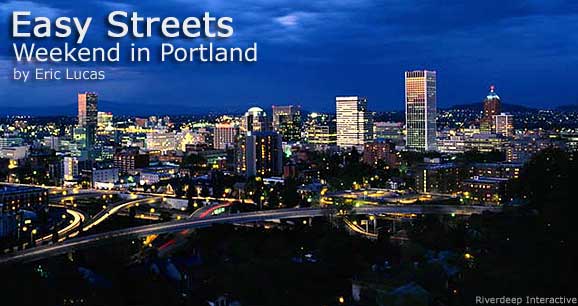 My perspective on Portland is up in the air.

Temporarily. Three minutes and 10 seconds, to be exact, the time it takes to ride the city’s new US$ 57 million aerial tram (www.portlandtram.org) from the Willamette River waterfront to its upper perch at Oregon Health & Science University. The ride affords the best view of the city and its Cascade volcano bookends, Mount Hood and Mount St. Helens, as well as the Columbia River in the distance, but it’s notable also as the newest link in one of the best small-city transit systems in the United States.

That’s what makes Portland, Oregon’s largest city (population: 563,000), such a marvelous West Coast weekend destination. You don’t need a car; you don’t need taxi fare; you don’t need hiking boots. All you need is to land at the airport (PDX), walk 50 paces west of the baggage claim and buy yourself an all-zone TriMet pass (US$ 19.50 for seven days; www.trimet.org), which will get you everywhere in the city worth seeing.

And there’s a lot worth seeing and doing — spectacular gardens, nifty museums, splendid restaurants and some of the best bookstores on the continent. I’m not much of one for shopping, but aside from the marvels at Powell’s Books — a local chain of bookstores claiming to be the largest independent used and new bookstore in the world — Portland offers one more inarguable retail inducement: Oregon has no sales tax, so most of us start shopping with a 10 percent discount.

Take MAX, the city’s tidy and efficient light rail, from the airport to downtown, where you can transfer to a streetcar to reach your hotel. I recommend one of three very different lodgings: RiverPlace Hotel (www.riverplacehotel.com), at the south end of the waterfront, is an upscale modern property with lodge-style decor and luxurious rooms; the Hotel Monaco (www.monaco-portland.com), in the center of downtown, is a whimsically decorated historic property operated by the peerless Kimpton chain; the colorful and artsy Inn at Northrup Station (www.northrupstation.com) is a former motel rendered into distinctive suites in the heart of the city’s dining district.

After you’ve checked in, the first order of business is a weather inspection: Find the nearest high spot and look east and north. Can you see Mount Hood’s landmark snow cone (11,249 feet; 3,429 m) about 50 miles (80 km) to the east? If so, hop on a streetcar and take it all the way south to the aerial tram base.

It’s virtually the same as a gondola. When you ride it, you’re up in thin air, looking out over the city and surroundings, as if in a small helicopter. Magnificent vistas are available throughout the entire ride. If the weather is dreary, save the tram for a clear moment sometime during your trip.

Let’s presume the weather’s gnarly. That’s your cue to hop the streetcar to Powell’s Books (www.powells.com), the sprawling independent megastore at the edge of the Pearl District. Housed in a former car dealership warehouse, Powell’s has been declared best in the world by no less a critic than Susan Sontag, and is so large that you need a map to navigate its expanse.

This was the first major store to shelve used and new books side by side, a practice it follows today with its 1 million titles. One could spend days here; if needed for survival, good food can be had in the airy cafe. The opening of Powell’s in 1971 led the revival of the Pearl, a former warehouse district now transformed into a thriving neighborhood of condos, shops and cafes.

I’d suggest lunch a block away at Fuller’s Coffee Shop (136 NW 9th Ave.), a Portland institution where the best corned-beef sandwich in Oregon, inscrutably called a Sloppy Joe, is just US$ 5.75.

Back to Powell’s for hours more? It’s like the Louvre, impossible to encompass in its entirety. Once you get bored with books, hop back on the streetcar up to Nob Hill to stroll the shops and cafes for which it’s famous, making sure not to miss Moonstruck Chocolate (www.moonstruckchocolate.com), where chocolates are hand-dipped miniature works of art, and the incomparable, utterly unique 3 Monkeys (803 NW 23rd Ave.) oddments and clothing store. Where else can you choose from a wide array of upraised-hand table sculptures?

My favorite dinner stop on Nob Hill is Serratto (www.serratto.com), a delightful Mediterranean bistro in an old storefront with massive old-growth Douglas fir beams. The food isn’t fancy — just the best calamari, spinach ravioli, braised lamb shanks and pan-seared fish in town. Luckily, all you have to do to get back to your room is walk three blocks to the streetcar stop.

A generation ago an unsightly freeway occupied Portland’s riverfront. Torn down in 1974, the city used the space for the Tom McCall Waterfront Park, an expansive European-style promenade of lawn, gardens and trees that’s perfect for a morning stroll to the Hawthorne Bridge. Use this as the pathway across the Willamette to one of the best so-called children’s museums in the country.

The Oregon Museum of Science and Industry (www.omsi.edu) is a cavernous facility with literally hundreds of hands-on exhibits and games that, frankly, can be as much fun for adults as kids. Some are simple: See who can make the best paper airplane. Some are for budding math and science geniuses; but no one can be bored here.

After, cross the river on the Burnside Bridge to the Saturday Market (www.portlandsaturdaymarket.com), one of the first such urban food-and-crafts markets in the country, founded in 1974. It’s a great place to pick up lunch before you head into Chinatown. Sure, you can get beads and incense and those incredibly useful handmade candles here; you can also get a great hamburger or a plate of stir-fried phad thai rice noodles. And when’s the last time you saw macramé?

A few blocks away, the Classical Chinese Garden (www.portlandchinesegarden.org) is the only one of its kind in the United States, hand-crafted by artisans from China in the late ’90s. The carefully composed ponds, courtyards and view-framing porticos set off exquisitely grown shrubs and trees, and fend off the urban bustle; the interior tea shop is a splendid spot for an afternoon refreshment.

Though there are ample restaurants downtown, the streetcar is quick and easy, and Nob Hill is known for its numerous dining establishments. Wildwood (www.wildwoodrestaurant.com) helped pioneer both Nob Hill dining and Northwest Contemporary cuisine; it has received rave reviews in media ranging from Food & Wine magazine to O, The Oprah Magazine. Sturgeon and duck are signature dishes here.

Then it’s back on MAX’s Beaverton line, which plunges beneath the ridge west of downtown through a deep tunnel. Halfway through the hill, the deepest train station (260 feet; 79 m) in North America offers access to the attractions in Washington Park.

The Oregon Zoo (www.oregonzoo.org) is distinguished by its compact collection of engaging exhibits, including Lorikeet Landing, where visitors are enchanted by the small parakeet cousins that land on their hands to feed. Eagle Canyon ably depicts the interconnection of bald eagles and salmon.

Portland’s Japanese Garden (www.japanesegarden.com) spills down a hillside just past the zoo, with a tumbling stream, moon bridge, azaleas and rhododendrons arranged in a less structured fashion than the Chinese garden, but equally serene. Most striking is the Sand and Stone Garden, reflecting Zen traditions.

Portland’s famed International Rose Test Garden (www.rosegardenstore.com), on the hill just below the Japanese Garden, is one of the largest and most varied in North America. Portland’s climate blesses rose culture, and new cultivars are planted here to test their suitability. Separate gardens devoted to miniatures, gold-medal winners and new test varieties encompass a total of about 500 varieties of roses each year. Though June is the peak month, there are some blooms April through November.

From here it’s a mild walk back to the train station, and — yep — that’s the same train that will take you all the way to the airport.