It all started so innocently with a simple question at a neighborhood gathering.

“We’re planning our next vacation,” my neighbor remarked. “Where do you think we should go—Disneyland or Walt Disney World?”

“We always go to Disneyland,” the lady from down the street announced. “It’s the original Disney Park, and the only one you need to visit.”

The family from next door took exception. “Why waste your time on Disneyland?” the dad exclaimed.  “Walt Disney World offers so much more.”

Before I knew it the Disneyland camp had gathered on one side of the table, while the Walt Disney World fans had moved to the other. Things were starting to look ugly. Then they all looked at me. “Which park do you think is best?” they asked with pointed fingers.

I drew myself up to my full height and replied with confidence, “Well…that depends.”

That answer did not satisfy the masses, so I knew it was time to call in the experts. I went to get my kids.

At 19, 16, and 13, my three offspring have become Disney experts in their own rights. We’re admitted Disney fanatics, and they’ve been visiting Disney parks since they were old enough to fall asleep in a stroller. We’ve tried almost every ride, Disney snack, Disney souvenir and Disney experience—and they still can’t get enough of it.

When most college students were heading to Mexico last spring, my oldest and her best friend went to Walt Disney World on their own. A mother could think of worse things. The kids sat down and offered their expertise.

“First, you need to consider when you’re going,” my middle daughter started off. “That makes a big difference.”

She’s right, of course. The weather can make or break your vacation experience. Orlando in the height of summer can be brutal.

During one muggy July visit to Walt Disney World, the temperatures were so miserable that we spent most of our time rushing to rides that offered air conditioning or splashes of water. That meant we missed some of the best park experiences.

The fall and spring in Florida, however, provide beautiful warm weather. Even in December and January, the average high is 72 degrees. During these seasons, the park is not as crowded (with the exception of the holidays), so you can spend more time riding rides, rather than waiting in line.

California, home to Disneyland, has more temperate, dry climes. Summers are hot, but comfortable, and spring and fall are lovely times to visit. November to March offers the smallest crowds, with lows in the 40s to a high of 70.

If you go when the weather is warm in California or Florida, you can fit in a visit to the beach.Huntington Beach and Newport Beach in California are less than 20 miles from Disneyland and offer wide, clean beaches with life-guards and good facilities.

In Florida, you can choose from beaches on either coast.  Daytona Beach and Cocoa Beach are about an hour’s drive on the Atlantic Coast, while many make the two-hour drive to Clearwater Beach, a lovely beach on the Gulf Coast.

“Are you driving or flying?” my youngest then posed to the crowd. “That makes a big difference.” This spoken by a child who has spent 2,000 miles round trip crammed in the backseat of the car.

Many a family has loaded up the car for the trek to the Sunshine State. Granted, the drive to California may begin with gorgeous scenery, but then begins to drag when you hit the Nevada line.“Are we there yet?” begins in earnest as you crawl across the Nevada desert. You’re thrilled when you finally see the Disneyland sign.

It’s important to consider which park you are closest to. Can you drive or should you spring for airline tickets?

“Let’s talk about your kids now,” my oldest added in her wisdom. “How old are they?”

When my kids were younger—preschoolers through age 8, we found Disneyland a better fit.

To start with, the two parks—Disneyland and now California Adventure—are closer together, making it easier to get around with little ones and strollers.Stay at one of the Disneyland Resort hotels—Disney’s Grand Californian, Paradise Pier or Disneyland Hotel—and you can walk to the parks. That makes it easy to put the kids down for a quick nap in the afternoon before you head back to the parks.

Disneyland is well-suited for the younger set, with attractions like Mickey’s Toontown, Playhouse Disney and the Storybook Land Canal boats easily accessible. The Little Mermaid, Ariel’s Undersea Adventure, is one of Disneyland’s newest rides. Riders climb aboard a giant clam shell and descend below the waves to an underwater grotto.

No matter what your age, Disneyland brings out the child in all of us. Disney’s famous characters and stories are a treasured part of American culture. These larger-than-life characters are the tales of our childhoods and the happy memories we want to pass on to our children. Even in their teens, my girls still exclaim with joy when they see a Disney princess at the parks (though they wouldn’t admit to this).

As my kids have gotten older, though, we’ve tended to gravitate toward California Adventure on our treks to California. Adrenaline-filled rides like California Screamin’ roller coaster and The Twilight Zone Tower of Terror now have more appeal to my thrill-seeking kids, and Soarin’ over California is a favorite with all of us.

Within its 39 square miles, there are four theme parks, two water parks, 81 holes of golf, 23 resort hotels, and two spas.  You can also camp, scuba dive, water ski, fish and dance the night away.

No matter how many times you have visited, there is always something new to try. The question is, where do you begin?

Most people start their Disney World visit at the Magic Kingdom, which best embodies Disney enchantment. Just the sight of those beloved favorite Disney characters in front of Cinderella’s Castle is enough to put a smile on anyone’s face. Space Mountain has been thrilling guests for years, while Mickey’s PhilharMagic, a 3-D film that stretches across one of the largest seamless screens in the world, is another top attraction.

Hollywood Studios is about the magic behind the camera, offering movie-themed attractions, stunt shows and backstage tours. The park offers some of Disney’s best thrill rides, including Rock ‘n’ Roller Coaster and Tower of Terror. Toy Story Mania! is one of our favorite rides at Walt Disney World, but there’s always a huge line. Get there early in the morning to avoid a long wait.

Disney’s Animal Kingdom has rides, nature, action and zoo life—all in one location. Some 1,700 animals call the park home. Some rides let you to view them on “safari,” while other attractions highlight the stories of the animals and the exotic lands they live in. The roller coaster Expedition Everest is a popular favorite, and Kilimanjaro Safaris offers a 20-minute ride through a 100-acre savanna home to giraffe, elephants, zebras and lions. 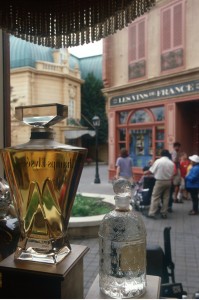 Our favorite Walt Disney park?  That would have to be Epcot. This park is unlike anything else I’ve ever seen, and it’s best for older children and adults. At Epcot’s World Showcase, you can experience 11 distinct countries. Epcot has brought the essence of each country to Orlando with shops, restaurants, movies and experiences.

Each national pavilion provides a visual representation of that nation. The shops carry goods from that region, and the restaurants reflect national foods. Even the staff is from that particular country. I like the 360 degree movies at China, Canada and France, while my 13-year-old son loves the Kim Possible World Showcase Adventure, an interactive game where kids serve as secret agents on a quest throughout the park.

With such a wealth of Disney opportunities to choose from, there’s no “right answer” to the Disneyland or Walt Disney World question. Each park offers something unique, and as long as you experience it together, you’ll have a wealth of family vacation memories.