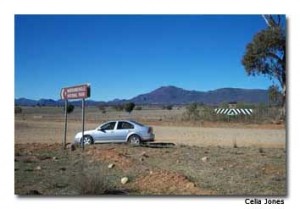 This small Aussie town wasn’t in our original plans…

People seldom stay long in Coonabarabran. Travelers use it as a halfway stopover when driving north from Melbourne to Queensland on Australia’s east coast. We intended to stay just one night as well. But last winter, we ended up in this small country town in New South Wales for an entire long week.

After a long day of driving, my husband and I knew we were getting close to ‘Coona’ (as Australians call Coonabarabran) when the earthy smell of cow manure assaulted our nostrils, and all we could get on the radio were stock and grain prices. Also, an increasing number of dead kangaroo carcasses littered the highway. It’s said that a tourist once lived here for a month on road kill alone.

It seemed likely we would encounter some lively ‘kangas’ (kangaroos) at this time of night, so we kept our eyes peeled and stuck limpet-like to a local ‘ute’ (truck) in front of us. With his large extra spotlights and a sturdy-looking bull bar, the trucker could sweep away the largest suicidal kangaroos before they splattered on our front bumper. But we arrived without any marsupial incidents.

In Coona, we checked into our usual self-contained cabin, where the manager had left the electric heater running so the room would be warm for our arrival. It was a very clear night, just the sort of night to take in the evening show at the Skywatch Observatory, about a mile (2 km) from town.

Coona is considered the “Astronomy Capital of Australia.” And the observatory on Siding Spring Mountain (17 miles or 28 km) along the western road to Warrumbungles National Park is actually regarded as Australia’s foremost optical astronomy research center. Even with the naked eye, the sky was so clear that we could easily see the Milky Way.

The freezing temperature took our breath away as we lined up for the guided Skywatch tour and waited for our turn to look through the smaller telescopes aimed at the various planets.

The next morning, we woke to find the cabin icy and the water pipes frozen solid. While waiting for the pipes to warm up, we took in the pleasant bucolic tableau of the steamy cows huddled together on the frosty paddocks behind our cabin.

We decided to head out to the Warrumbungles National Park. I was enjoying the panorama of ancient volcanic mountain peaks when my adventurous husband turned off the main road onto a rocky, dirt road.

We heard a loud thump, but we kept travelling until the warning signals in our car went ballistic. My husband got out of the vehicle just in time to catch the last of the oil dripping from the punctured sump. The empty fields and paddocks all around us didn’t bode well.

Fortunately, in about five minutes a white pickup truck materialized out of nowhere and sped toward us in a cloud of dust. A young farmer wearing the traditional wide-brimmed hat came over to us. “You ‘right, mate? We followed the trail of oil to your car.”

Luckily, his truck had a UHF radio, which his wife used to call her mother and request a tow truck from town to pick us up. Five minutes later, another farmer’s ute pulled up to see if he could also offer assistance, and when they both left, the mother with the UHF drove by to see if we were all right while waiting for the tow truck. It seemed breaking down on a lonely road was a good way to meet the locals.

We were soon towed back the 18 miles (30 km) to the only garage in town, where we learned that a new oil sump had to be ordered for the car from Sydney. Since it was the weekend, we’d be stuck in town at least another few days. The mechanic drove us back to our cabin.

Now stranded, the only eating place in walking distance was a roadhouse. Inside the diner, the homey smell and crackling of chips frying worked on our appetites. I felt my arteries clogging up just reading the menu; fried breakfasts were the ‘plat du jour’ and were served all day.

The next day we took a walking tour of Coonabarabran. The town has only one tree-lined main street about two blocks long with a large, brick clock tower at the southern end of town. Window-shopping was a unique experience as the shop displays consisted of faded boxes of fertilizer, dusty compost bins and dead blowflies.

Most of the town’s inhabitants lived in half a dozen side streets consisting of small, well-kept timber houses built in the 1950s with neat cottage gardens. Our only distraction was one of the town’s three pubs (hotels) where you could get a huge ‘counter meal,’ have a cold beer, play the ‘pokies’ (slot machines) and amuse the locals trying to say the aboriginal names such as “Coonabarabran” or “Warrumbungles” with a beer-numbed tongue.

We hired an old Ford Falcon car from our mechanic so that we could pick up where we left off on our sightseeing of the Warrumbungles National Park.

On a few easy bushwalks, we found the kangaroo, wallaby and emu populations so prolific that we had to hold our stomachs in to avoid bumping into them on the bush tracks.

On the fourth day, we visited the Siding Springs Observatory. Inside the huge white dome is a dramatic photo exhibition of the stars and planets. Eight smaller telescopes are on site as well as the massive reflecting telescope. Commissioned in 1974, the Anglo-Australian Telescope was one of the last 153-inch (3.9 m) equatorial mounted telescopes to be constructed.

Its excellent optic, mechanical stability and precision computer control make it one of the finest in the world. It seemed somehow fitting that the small, isolated town of Coona with a population of only 2,900 residents and little light pollution at night would have such sophisticated telescopes to explore the outer limits of our galaxy.

We ran out of steam after the Warrumbungles and the observatories and cocooned ourselves in our cabin with the oven and fan heater on full. Trying to keep warm and ward off cabin fever, we watched “The Simpsons” and commercials for sheep drench and tractors.

I did emerge the next day to take in the “Crystal Kingdom” not far from where we were staying. The “Mineral Museum” opened in 1974 was the first of its kind in Australia to display the world-class zeolite crystals found in the area.

The lady who owned the shop had a very large collection of minerals, Zeolite crystals and fossils peculiar to the area. She spent so much time giving me background information on the various local minerals that I felt obliged to purchase a couple of inexpensive crystal necklaces.

On the seventh day, (almost the same time required to create the world), after repeatedly hounding the patient, laconic town mechanic with “Has the sump arrived yet?”, our car was finally fixed. Surprisingly, the bill was reasonable considering we were completely at the mercy of the only garage for miles.

Ecstatic at finally having our own car back, we were eager to journey on to our destination.

As we drove north out of town toward cities and civilization, we reflected on our experiences and the people we encountered and concluded that if we had to be stranded in a country town, we could have done a lot worse than Coonabarabran.