“Don’t worry, we’ve never had anyone bitten yet”

Those words rang in my ear as I gingerly swam towards a seething mass of sea lions. The curious animals greeted us like a group of excited children, diving off the rocks and swimming noisily towards us, but stopping at a cautious distance from the boat.

My family and I are in Peru, and this is today’s adventure. Our journey had begun aboard a yacht from the port of Callao to the Palomino Islands about six miles off the coast of Peru north of Lima.

Our tour was four leisurely hours, also taking a sedate tour around neighboring islands including viewing Humboldt Penguins (who sensibly have their rookery on a different island as they are a delicacy on the sea lion menu!)

Swimming with Sea Lions in Peru

Travelling to the island, our bi-lingual guide Monica gave an interesting commentary in both Spanish and English. Sea Lions are pinnipeds, she told us. This means that they can walk on their fins and, unlike seals, have small external ear flaps. They are sea mammals with a thick covering of short hair.

The males, called bulls, have an obvious gold-colored mane giving them their lionesque appearance (and hence their name). They can weigh up to 350 kg (770 lb) and can grow up to 9 feet in length while the females, called cows, are much smaller only weighing 159 kg (330lb) and grow to 6-7 feet long. They can live from 20 to 30 years.

And we were about to swim with them!

We were visiting in April when the rookery has a population of several thousand sea lions. During the breeding season, between August and December, this number can swell to as many as eight thousand.

When to See Sea Lions

The pups are born between December and February and take their first swim about a month later. The mother suckles the pup for about 12 months until they are weaned with the arrival of the next pup.

December to February is apparently a very good time to come to the islands for bird watching as the birth of the sea lion pups attracts many birds of prey including–gallinazos– a type of vulture, and even the occasional condor as they come to scavenge the placentas.

Our anticipation building, we squeezed into our supplied wetsuits.

I’m usually a sook when it comes to getting into cold water. But this is what I had come all this way to do. Taking courage in both hands, I plunged into the cold water of the Humboldt Current. Carrying cold Sub-Antarctic waters up the west coast of South America, the Humboldt Current teems with aquatic organisms and fish; ideal for sea lions.

I immediately knew exactly why we had been supplied with wetsuits. The water was freezing! 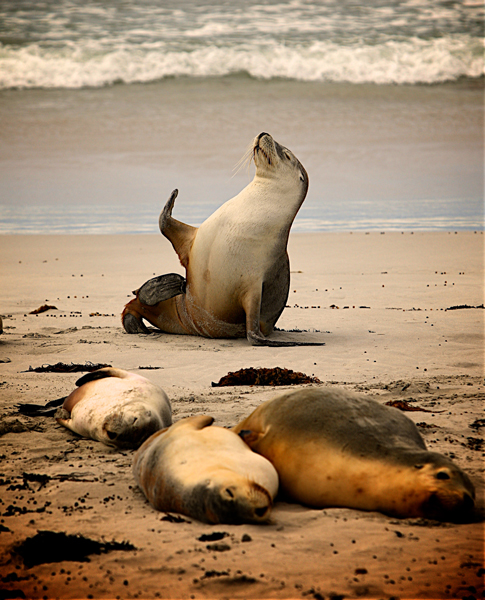 As we swam towards the ever-growing pod of sea lions the noise was overwhelming. A cacophony of loud, wild sea lion noises intermingled with exclamations and the squeals of delight from the tourists.

This was a totally non-invasive interaction with these wild creatures. You could never say we were interfering or harming their natural life.

I was glad to see they were not encouraged to come to the boat with buckets of dead fish, interfering with their natural food hunting, and we didn’t go onto their island; they came out to us. They were enjoying the interaction just as much as we did.

Often they would approach us with their angelic faces and bulging eyes full of curiosity. But occasionally one of the bigger sea lions would swim towards us with a bare teeth “grin” (back to the mantra!)

We had been told that we were not to touch the sea lions. But someone forget to tell these curious animals the rules! They swam close to us, often nuzzling or bumping into us then diving and swimming beneath us.

You could say some of them were “showing off” with their antics: leaping out of the water and performing their own mini Olympics. One cumbersome fellow unexpectedly tried to do a jump and landed between my daughter-in-law and me.

Unfortunately, he miscalculated and landed heavily between us. She felt the weight of this 400 lb creature partly landing on her and I got shoved roughly out of the way: all part of the fun.

The weirdest part of their behavior was their attraction to smelling feet. We had been advised to float on our backs and they might touch us.

It seemed to us that they were smelling our feet and even occasionally licking them. Their fixation on some feet even stretched to waiting in small groups of three or four to successively smell the same foot.

When our 45 minutes in the water had ended, we reluctantly returned to the boat. Then, for me, came the main challenge of the day. Getting back into the boat.

I struggled to get my foot on the too high bottom rung of the ladder. But, amidst my embarrassed giggles, with pushing from behind by my husband and lifting by my son and the obliging deck hand, my embarrassment was thankfully short lived.

Back on board, as we peeled off our wetsuits. All of us were euphoric, as we relived the excitement of the last 45 minutes.

Lima has many interesting ways to spend the day, but this is definitely the most exhilarating.

Many airlines fly to Lima, the capital of Peru. Lima is often only considered by many tourists as a stopping off point on the way to Machu Picchu but so many interesting day trips can be easily taken from Lima.

Our cruise company was Ecocruseros located at Av. Coronel Bolognesi  La Punta Beach about forty minutes by taxi from hotels in Miraflores or San Isidro.

Note: Similar tours are offered of varying length by other companies, however, the quicker speed boat type tours have absolutely no shade or toilets.

You can just turn up on the day but it is better to book online as some tours are not available on the days when cruise ships are in port.

Most importantly for us, choose a tour which supplies wetsuits. The water is freezing, even on an extremely hot day.

Note: There is an additional charge of 11soles per person for the SERNANP area (wildlife reserve) paid in cash on the day

A simple snack is served after the swim.

You can dine at The Yacht Club Peruano restaurant which has a delicious Peruvian style menu, located about one hundred metres from the Ecocruceros wharf.

Author Bio: Kerrie-Anne Riles is an Australian freelance travel journalist currently living in Peru. She has lived in seven different countries and travels extensively.
Her travel writing includes traveling to unusual places and quirky travel experiences, luxury travel especially cruising, and gluten free cooking and restaurants.
She is also an award winning textile artist and has written articles for Down Under Quilts.

Water Features Boost Fun Factor at Storied Glenwood Hot Springs Resort
Next Post: Belgian Getaway: What to See and Do in Bruges